Day 1 of travel went relatively well.  We had a slight delay out of KC but we easily made our connection in Atlanta.  We left KC about 1:20pm.  Our flight from Atlanta left about 6pm and landed around 11pm.  That was not the most pleasant flight.  The plane was a small 737 so it was really cramped for an international flight.

Rob & Staci had a rough start.  Their flight delay meant they had to run through the Atlanta airport to catch our connection.  It was an all out sprint & NOT a short one!  Poor Staci!

I felt like I was getting a cold on Thursday so I’ve consumed all sorts of natural remedies: silver, oregano, fish oil, thieves, and I have been diffusing about 6 different oils off & on.  I have had a headache & slight sore throat.  It lasted 4 days.  Now, hopefully no one else gets it!

We landed in Quito and we booked transportation through the people who we rented the apartment from.  A lady was standing in baggage claim with my name on a sign when we arrived.  She & the driver were in a minivan, but we still barely fit with all of our luggage.  Riding gear is bulky to fly with!  Plus we had to take more suitcases to keep the weight under 50lbs.  Unlike many other trips, all bags arrived!!  We took a carry on with necessities for the first few days & we didn’t check our helmets.

It was about a 25 minute ride to the apartment where Juan was waiting for us.  He barely spoke, but he showed us how to get in, the fridge was lightly stocked which was great!  BUT – he failed to mention in the ad that he only takes cash.  Thankfully we had enough, but that put a huge kink in my plans.

During our research we found that most places will not take credit card (restaurants, shops etc.) and that we should not bring $20 bills because most places cannot break them.  In addition we found the average meal to be $2.50 and it is common to take a cab for a few dollars.  So, I paid Juan nearly all of our cash, which was mostly 5s and singles with some 10s.  We found out the next morning that our research & reality were not aligned.

Back to the apartment.  It’s super clean, cute, in a great location & very safe.  The basics are covered!  There are a few things we didn’t like.  Primarily the ‘full’ size bed.  I am not sure what standard they use, but my feet hang off the end & Shawn says he sleeps like a baby in it – all curled up (just trying to stay on it).  It is super uncomfortable & hasn’t provided the best sleep.  The entire wall has floor to ceiling closets with tons of space, but the doors hit the bed so you can only open most of them a little bit & you can’t get in most drawers.  I didn’t mess with moving the bed.

There is a washer & “dryer” (as advertised).  I washed our clothes last night & found the dryer (a wire rack) in the corner.  Previously we all came to the conclusion that the small machine must wash & dry.  Nope!  I am pretty sure my jeans are not going to dry in one night.  It took a while to figure out the washer, but we did manage to each get a load done.

There isn’t a thermostat and we can’t find any vents so apparently there isn’t any heat or AC.  It is relatively comfortable, but a bit cool.  It’s in the low 60’s outside, but clear & no rain when we arrived.

The wifi works great here, so that is good!

I’ll post a few pics of the apartment later.  Here are a couple of shots from our trek to Quito! 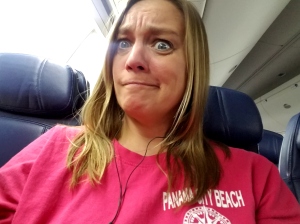 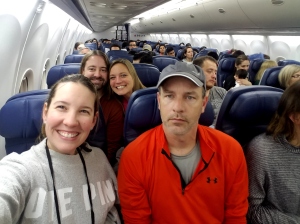 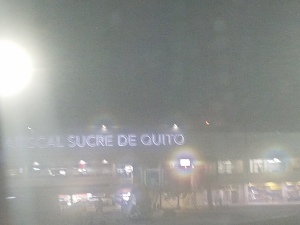