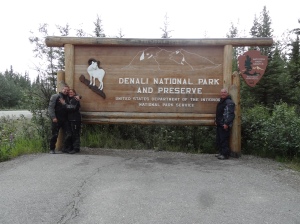 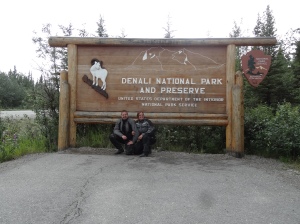 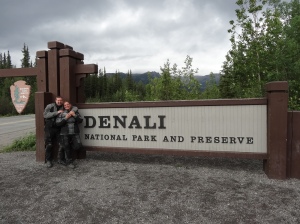 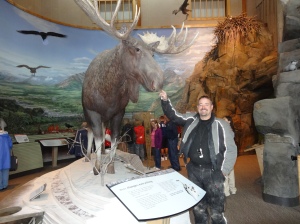 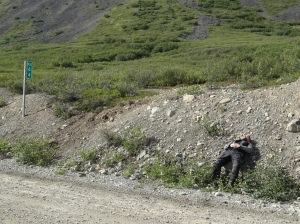 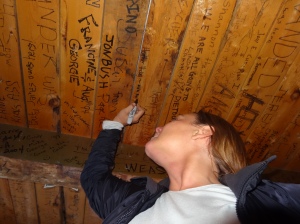 This morning we headed out of Fairbanks for Denali.  We stayed at the 7 Gables Hotel the last 2 nights.  All the rooms in Fairbanks were sold out & since we were back early, we didn’t have reservations.  It had some nice qualities.  It was big, it had 2 extra beds so there was room for Dad.  It had a kitchen & a large living room.  It also sort of smelled like cat urine & wasn’t the nicest place we have ever stayed.  But, I am happy that we were able to dry out our gear, shower & rest.  I asked the owner & it used to be an old fraternity house.  I am pretty sure the red carpet is original.

Thankfully today was partly sunny, with no rain!  We’re camping again tonight.  We’re in another RV site so we have electricity.  It’s sort of like a gravel parking lot with lots of mosquitos.  For the first time this trip I had to break down & put on my mosquito head net.  They can even bite through my clothes.  They are horrible!  Most of the bites I have are on my face & hands since they can’t get through my riding gear.

Rob called & he made it back from Deadhorse.  I haven’t heard his story yet, but he is headed this way to re-join us.

Visiting Denali is different than any other park I have ever been to.  You can really only hike in or take a guided tour.  I have heard great things about the bus trip, but it is a bit longer than I want to ride.  It was too cloudy at the top of the mountain to spend any money on a flight tour.  We spent time at the visitor center, checked out the area & then decided to ride the Denali Highway.  It is a dirt road that was the only road to Denali before the Parks Highway was built in the 70’s.  It was a pretty ride.  We didn’t see any animals, but  we took some nice pictures.

This morning we saw 2 moose.  They were good-sized, but I wasn’t able to get turned around & get pictures before they disappeared into the trees.

In other news – Shawn’s blinkers aren’t working.  After going to the car wash yesterday, they quit.  He has resorted to hand signals.  He pulled the seat off to check on the fuses & found that his fuse for the battery was melted, but sill hadn’t popped.  I don’t know how that happens.  It was crusty & looked terrible.  He managed to pull it out in pieces & put a new one in.  It only works when it is pushed to one side & not fully engaged.  We rode all day without any issues, so hopefully it doesn’t cause us problems.  We still have over 3,500 miles to go.

Getting caught up on other excitement in our world – Shawn dropped his bike on the way back from Wiseman.  When my belt broke, it was around midnight, super foggy & we were on a curvy road.  When he looked back & I wasn’t there he turned to sharp & dropped it on the highway.  He assumed I blew through the corner & over the guard rail.  He strained his back lifting it up & has been sore the last 2 days.  I was thinking that he didn’t notice I was missing for a long time, but when he finally got back to me I was safe & parked on the shoulder.  I didn’t know he had dropped his bike so I smiled, waved & happily said “you got all the good out of it”.  The bike is fine & hopefully his back will feel better tomorrow.

Tonight we ate at the only place open in Cantwell after 7pm.  It’s a tiny saloon 2 miles out of town.  The bartender/waitress/cook was friendly.  I signed my name on the ceiling.  It is a bar, but the food was surprisingly good.

Next we’ll ride to Anchorage, then up to Tok.  At that point we’ll get back onto our schedule & if the weather is good we’ll head up to Chicken, AK.  That trek has a lot of dirt roads so if it is raining, we’ll skip it.  I have had more than enough mud for one trip.  Shawn says his ‘can do’ attitude of riding in any weather condition went out with his back & he is just on a sight-seeing trip now.

The ride to Anchorage is one that I wanted to do originally, but we planned the Arctic Ocean instead.  Now we’ll get to see it!  It should be a beautiful ride past Denali State Park & Talkeetna.  I’m sad we didn’t see Deadhorse, but this ride should be good.  AND – the weather is looking nice!  By tomorrow morning our group will be re-assembled & we’ll be off!

Although it still looks like late afternoon with all the light, it’s late so we are going to get some sleep.  Today was another day of feeling like a tiny speck in a huge forest.  Alaska is huge!